“Thinking with Type” and “Graphic Design”

Posted on September 8, 2008 | Comments Off on “Thinking with Type” and “Graphic Design” 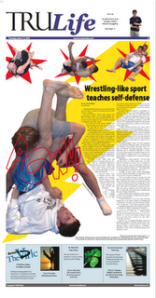 I’ve always been told that you’re a good page designer when people stop telling you that you’re a good page designer. In other words, the design was so effective that it was invisible. It seems to me that the use of proper lettering – using the proper typeface – is much the same. If the typeface is distracting, like the bitmapped letter compared to the anti-aliased letter, then its use was a poor choice. The goal in choosing typefaces is to be so good that you’re invisible.

But maybe not always.

In my designing work, certain typefaces have already been chosen for standard headlines, but I am free to choose any typeface we have for feature stories, graphics, and other oddities. In this case, I’m not so sure invisibility is the goal. Sometimes, the typeface is precisely the element that needs to jump out. I would argue that this goal – using a typeface that jumps out – has made for some of the best and worst page designs in newspaper history. One thing I do think is really clever is the suggestion that hand lettering is still a driving force in graphic design (See the “POW!!” on the newspaper page above at left.)

Utilizing non-textual elements also is an important task for media. Magazines, particularly, tend to use a lot of visual elements in their layouts. Often, these are in the form of simple tables, graphs, and charts. As shown by Graphic Design, there are myriad more creative ways to do such things. But they don’t get done. My question about this is: If people care so much about graphic design, how come they won’t pay a little extra for a superbly designed magazine? The answer: Substance. If that superb design carries with it some meaning, some purpose, then it is actually worthwhile. I don’t mean to sound down on graphic design. It’s actually something I really enjoy and admire. But it frustrates the heck out of me when I want to try it at my job and am told there simply isn’t time/money/resources to do so. I worry that newspapers are dying, and graphic design for print will soon follow. In some ways, maybe, the Internet is a not-so-good thing.

This entry was posted in All blog entries, English 350: Visible Rhetoric and tagged visible rhetoric. Bookmark the permalink.