Here’s something I don’t think I’ve touched on before: fighting. Talk about some visible rhetoric! Mixed martial arts is an up-and-coming sport, largely because the amount of blood inherent in the fights kept it off TV for a number of years. 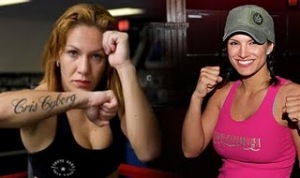 I was at a friend’s house this weekend to watch the fight between Cris Cyborg and Gina Carano. It was the first time I’d watched a major fight between women. However, I’d seen enough of “The Ultimate Fighter” and other UFC fights to notice a distinct change in the visible rhetoric of the broadcast.

The first thing I noticed was that there was a lot more emphasis on the women’s faces. As the two prepared to face off, cameras maintained a tight focus on each of their faces. In fact, the focus became so tight that it eventually narrowed to just the eyes. I’ve never seen this done with male fighters while they are actually in the ring. This was pretty interesting given that women usually have their bodies played up in Western-style broadcasts. So, is this a sign of a feminist attitude within the fighting culture, or is it some sort of strange twisting of that usual prejudice? I’m leaning toward the former, especially since it was clear that the observers of the fight — including many well known male fighters — thought of it as no different than any other.

The online visible rhetoric of the fight is somewhat different, with Carano–who is recognized as the more traditionally “pretty” of the two–shown in sexualized poses while Cyborg seems to maintain a persona as a fighter and a fighter alone. (Check out the photos I’ve posted below, which, obviously, are borrowed.)

This entry was posted in All blog entries and tagged visible rhetoric. Bookmark the permalink.

One response to “Cyborg vs. Carano”