On the first day of a women’s and gender studies class I taught a few summers ago, I wore a hot pink pencil skirt. On the second day, I wore dark jeans and chucks, and I asked the students if they’d noticed what I wore yesterday. Every single one of them had. By the end of the class, one student said that she almost dropped the class that first day because my outfit made it seem to her like I didn’t know what feminism was. For that student, at least, I managed to broaden the idea of what a feminist can look like. But I still wonder what cultural signals are telling people that a feminist can only be one thing–that a feminist can’t wear a pink skirt. Defining feminism so narrowly is exactly the opposite of its main message, which is that people can be and do whatever they want regardless of sex.

I’ve seen an increasing number of news stories, blog posts, and online conversations lately about “anti-feminism.” I’ve read a number of them, and the best I can understand is that the current “anti-feminism” movement is about hating anyone who identifies as feminist. This doesn’t make sense to me because feminists are extremely diverse; the only real organizing principles of feminism are a drive for a equality among all people (which seems like a pretty obviously Good thing) and an implicit assumption that sexual equality has not yet been achieved on a systematic scale (which is supported by overwhelming quantifiable data). But, apparent feminism is also about listening, so right now I’m trying to interpret these statements as the beginnings of worthwhile political conversations. In the meantime, I’ll just keep reminding people that “feminist” can mean a lot of things–and our personal interpretations of the word “feminist” are quite telling. 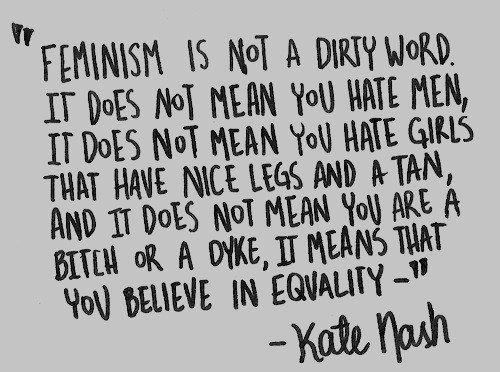 This entry was posted in All blog entries and tagged activism, feminisms, identity. Bookmark the permalink.

One response to “On Anti-feminism”